Wish Like({{iLikeThisTotal}})
“Hey, auntie, What’s good today?”
“Good today? Silly lad, Everything’s good anytime!”
“All right, get me a big fresh one. While you’re at it, chop up some live octopus first, will ya?”
Any trip to Busan wouldn’t be complete without some sliced raw fish.
Once you have enjoyed the sea with the city lights reflecting on the water at night, you can perfectly wrap up the day with some delicious food. Old restaurants with several layers of history are the best way to meet the people of Busan, while window seats on restaurants offer a beautiful view of the city to be enjoyed with good food. But no matter where you go, you’ll surely enjoy a sliced raw fish in Busan.
When you order food, you’ll be talking with people who have a strong Busan dialect. Often, the first dish on the table, which is a warm bowl of rice porridge, boiled with the innards of abalone, is served as an appetizer to help regulate your digestion from the food you’ll be ordering. Moreover, when you blow a spoonful of porridge, to cool it down, you’ll be able to smell the scent of the sea. Abalone rice porridge is remarkably effective for strength recovery. Its rarity earned its nickname “the king of porridge” in Korea, only brought out for the most important guests.
Colorful seafood and side dishes fill every corner of the table, making it look like a sumptuous tapestry of flavors. This is the most anticipated moment in the raw fish dinner, first enjoyed with the eyes and tasted only thereafter. You’ll often be confused about what dish you should try first. But that is one problem that you won’t mind pondering on.
First up is the nakji tangtangi, a live octopus dish chopped to make it easier to eat. How could you compare this experience of eating a writhing and delicate octopus? As one of the most dynamic dishes in Korean cuisine, the octopus is said to be one of the most potent stamina-boosting foods out there. Conventional wisdom advises us that an octopus is equivalent to 1 geun (600 g) of ginseng. Its rich taurine content, which helps assist liver function and eliminates hangovers, is a godsend for lovers of fine spirits. As the saying goes, “spring is the season of webfoot octopus, and fall is the season of octopus.” Octopi are at their best when the cold winds start to blow. However, there are so many others that draw people’s attention: sushi, blanched horned turban and shrimp, sea pineapple, and pancakes. Each click of the chopsticks brings another flavor from the sea to the tongue.
As the plates are emptied out, a collection of sliced raw fish adorns the center of the table like a bouquet of flowers in full bloom. Taken from the sea and filleted at the tip of the chef’s knife, this work of art must first be paid with respect through visual appreciation. Sliced raw fish, caught and filleted fresh and in season, have a cool, chewy, and elegant texture. Slight differences in the texture let you compare flavors of other raw fish. The chewy texture of rockfish gives way to the simple elegance of an olive flounder, and the tender flesh of a sea bream is the high note of culinary adventures in Busan.
There’s always more. Springtime is the season of flounders, summer croakers, fall gizzard shad, and winter yellowtail tell the tales of their season on the table. Raw fish slices are great ways to take in the beneficial unsaturated fat of fishes, which help reduce the blood cholesterol level, thus preventing diseases. The jury is firmly on the side of the prosecution: it is always the right decision to enjoy some sliced raw fish in Busan.

The prosecution, however, has not rested its case yet. There is still the crispy, golden, and deep-fried morsels, and the char-grilled mackerel pike to be called to the stand. Then, there’s the soup, or even a spicy stew, to wrap up the case. Oh, a surprising turn from the witness stand brings out sliced raw mackerel on the table. The hearing is not yet over.
“Ah, I want some sliced raw fish today!” 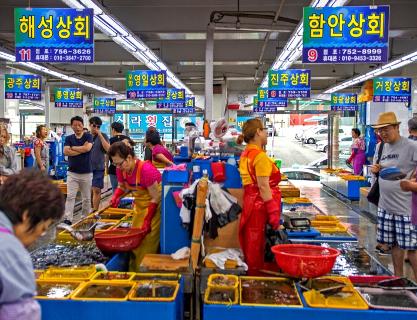 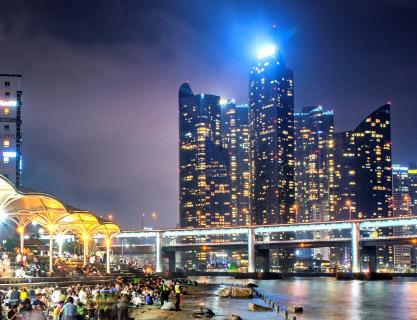 Millak Waterside Park, romance by the sea in Gwangalli 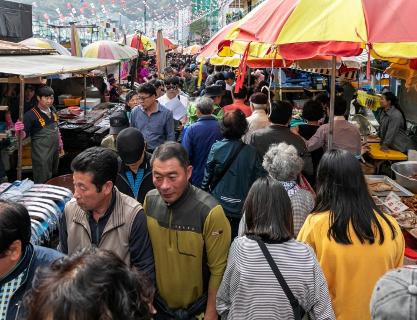 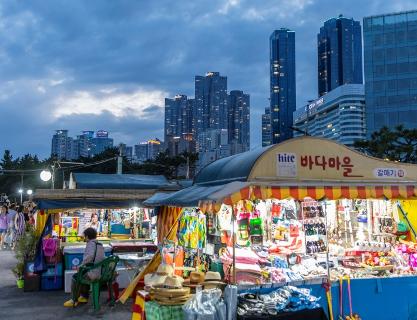