An exhilarating experience, the final destination of mountain bikes

Wish Like({{iLikeThisTotal}})
Baegyangsan Mountain, which encompasses Sasang-gu, Buk-gu, and Busanjin-gu in Busan, is one of the most beloved mountains for hikers. The trails are well organized everywhere and ideal not only for climbing but also for mountain bike and bicycles. The main and most popular trail starts from Children's Grand Park, Busan to pass through Seongjigok Reservoir and reach the peak.
Seonamsa Temple, which is the beginning and end of the mountain climbing activity in Baegyangsan Mountain, is famous for its red prumusmume. When the winter season is nearly over, the red ume trees burst shy redbuds in Seonamsa Temple, signaling the arrival of spring.
Seonamsa Temple is located at the foot of the mountain with a calm and relaxing atmosphere. Built in the Silla Period, the temple still provides a resting place for visitors to Baegyangsan Mountain.
As you climb up along the forest trail famous as Galmaetgil Trail, you’ll encounter various flowers and trees. It’s a path where flowers blooming with different charms by season bring pleasure to the eye. With the silent passage of time, the flowers bloom in summer and fall through spring.
At the end of the forest trail is Aejinbong Peak, the highlight of Baegyangsan Mountain climbing. This peak provides diverse charms as well. In spring, the mountain is covered with royal azaleas in full bloom. During this period, the Azalea Festival is held, so the peak is crowded. In autumn, skybirds create dramatic scenery along the ridge, adding fun to walking.
Once you reach the top of Baegyangsan Mountain, which is 642 m above sea level, you’ll be welcomed by the stone pagoda full of hikers’ dearest wishes. This is the highest point of the mountain that seems to touch the sky. As you make your well-wishes, take a nice stone out of many, and put it on a small stone tower stacked by past visitors.
The path from the peak going along the ridge to Bultaeryoung Pass is open on both sides, allowing you to enjoy the view. In autumn, a large silver grass field spreads out, making it a popular spot for hikers. The path from Bultaeryoung Pass to Meeting Point is relatively steep. It used to be one of the dangerous paths, but the stairs are now well constructed for your safety.
The end of the hike leads to the Children’s Grand Park, where Seongjigok Reservoir is located. As the deck is well formed along the hinoki cypress forest, the path to the Seongjigok Reservoir is easy to walk. On the path, you can slowly walk with the forest delivering plenty of phytoncide.

Baegyangsan Mountain is often visited by mountain lovers.
It’s a great place to enjoy the beautiful scenery and charm of mountains that you’ll meet in Busan.

Please dispose of your own trash. 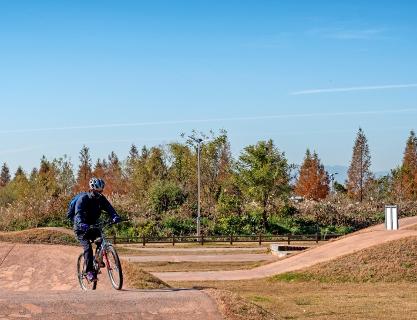